DALLAS, TX — (Marketwired – Nov 27, 2017) – Texas new home sales are up, prices are down, and they sold a little faster in October, according to HomesUSA.com® New Homes Sales Index and other data released today. The Index is 12-month rolling average of the Days on Market for new homes listed in the local Multiple Listing Services (MLSs) for the four largest Texas markets, including Houston, Dallas-Ft. Worth, Austin and San Antonio.

The pace of new home sales improved in all of these markets but Houston, according to the HomesUSA.com Index for October. The Days on Market averages were down from September in Dallas-Ft. Worth, Austin and San Antonio.

Ben Caballero, owner of HomesUSA.com and the number one real estate agent in the U.S., notes the Texas data he released today is largely in alignment with the Commerce Department’s announcement today on New Home Sales for October, which reported new home sales were up 6.2 percent nationally from September. He also notes that we may be seeing signs of the impact of Hurricane Harvey seep into Houston’s housing numbers.

“As we head into the winter, we have yet to see the seasonal impact on new home sales, but we may be seeing some signs of Hurricane Harvey’s impact in Houston,” said Caballero. “For builders and buyers, it looks like a merry holiday season. New home sales are continuing at a record pace, and buyers are benefiting from new home prices that are a little lower,” he added.

New home prices drop
A holiday gift for buyers has come early in the form of new homes as prices improved in October in Texas, dropping from $363,269 in September to $362,164, according to data compiled by HomeUSA.com. [see Chart 1 below] 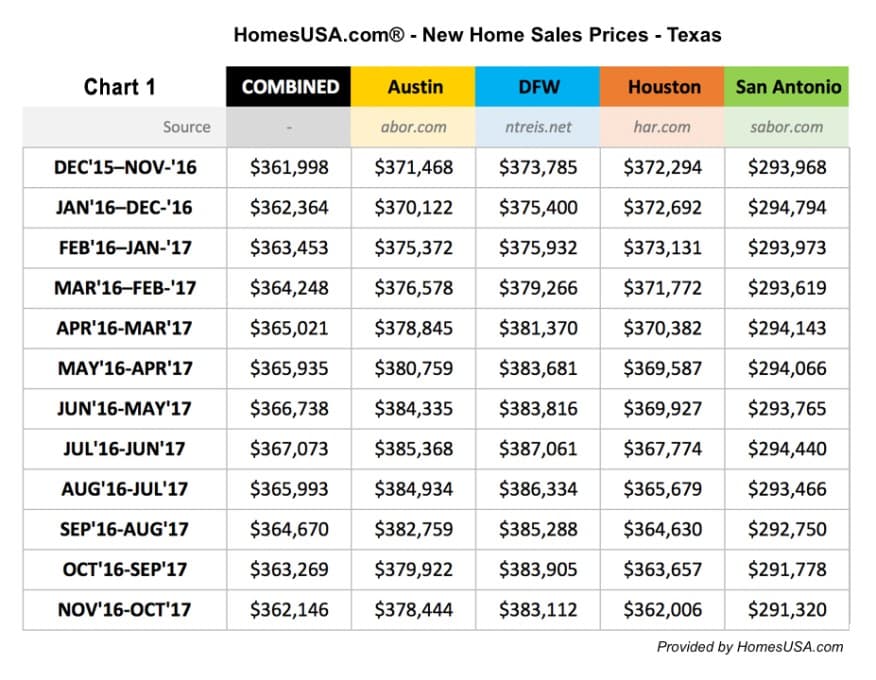 New Home Sales Up in All Four Major Markets
In all four of the Texas major housing markets, new home sales continue to show record strength. The rolling 12-month average of home sales in these markets increased from 3,226 in September to 3,249 in October. That’s according to data compiled by HomesUSA.com from local MLS and trade associations, including the Houston Association of REALTORS®, North Texas Real Estate Information Systems, San Antonio Board of REALTORS® and the Austin Board of REALTORS®. 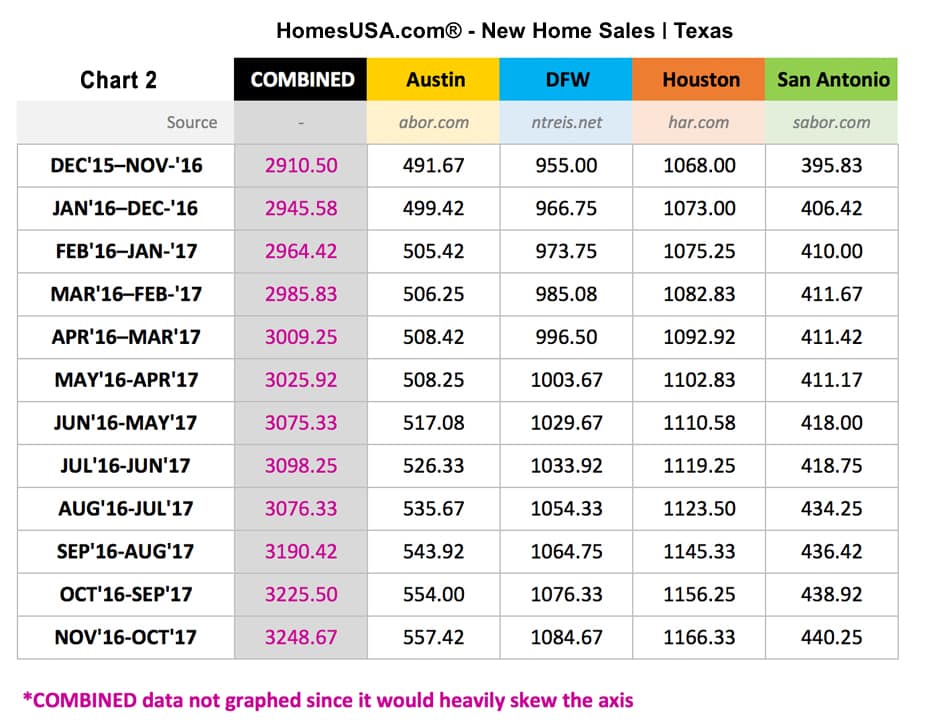 Caballero adds, “So there really is no apples-to-apples comparison for the Days on Market for new homes under construction with existing homes.” [see Chart 3 below] 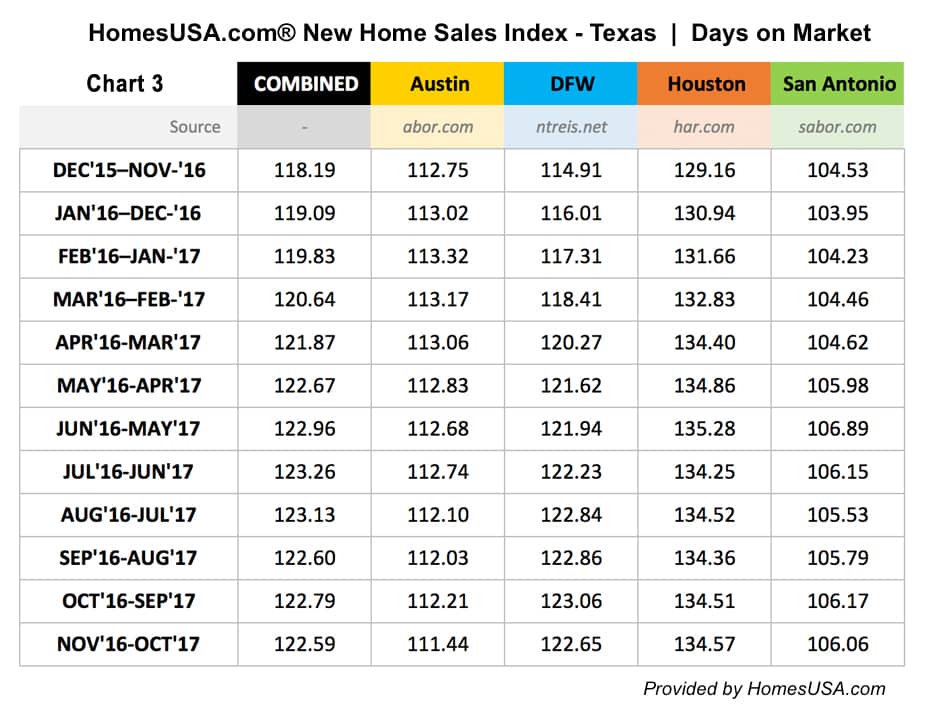 The HomesUSA.com New Home Sales Index is a first of its kind index to track new home sales. Created by Caballero, who was named “Most Innovative Real Estate Agent” by real estate news firm Inman News, the index is an analysis by HomesUSA.com of sales of homes listed in the Dallas-Fort Worth, Houston, Austin and San Antonio local Multiple Listing Services (MLS). [see Chart 4 below] 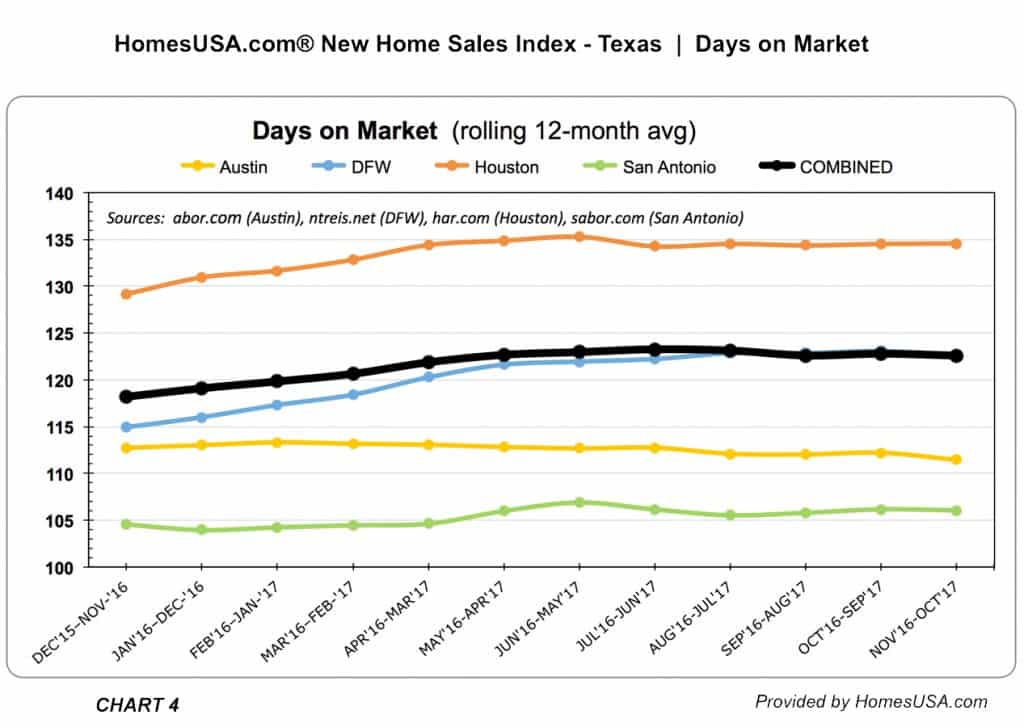