New home sales numbers and prices  are up in all of the four largest new homebuilding markets in Texas, but the pace of new home sales in three of these four markets continued to slow in May, according to the HomesUSA.com® New Homes Sales Index released today. Austin was the one surprise – again – as Austin, for the second month in a row, was the only major new homes market in Texas to show a slightly faster new home sales pace for May, as its number of Days on Market decreased.

Houston, the largest new homes market in Texas, as well as Dallas-Ft. Worth, San Antonio and Austin all reported higher new home sales prices in May. The average new home sales price in Houston increased from $369,587 in April, to a rolling 12-month average of $370,008 in May, according to data compiled by HomesUSA.com® from the Houston Association of REALTORS® (har.com).

In Austin, the average new home sales price rose to  $384,228 in May, up from a rolling 12-month average of $380,759 in April, according to data compiled by HomesUSA.com® from the Austin Board of REALTORS® (abor.com).  According to HomesUSA.com®, the number of Days of Market for new homes sold in Austin declined slightly from a rolling annual average of 112.73 in April, to 112.67 in May.

“The Austin economy may not be bulletproof, but being a hub of technology, education and legislation makes it hard to stop,” said Caballero. “Job growth is what drives home sales, and that bodes well for Austin,” he added.

Overall, in the combined four largest new home sales markets in Texas, the overall pace of new home sales has been slowing steadily since last October, according to HomesUSA.com®, as the average number of Days on Market in the four Texas markets increased from 117.58 days in October 2016, to 123 days last month, May 2017.

Ben Caballero, owner of HomesUSA.com® and the number one real estate agent in the U.S., notes that the slight increases in Days on Market for new homes in three of the four biggest Texas home markets aligns with the Commerce Department’s announcement today on New Home Sales for May.

“The Texas economy continues to lead the nation in homebuilding,” said Caballero. “Job growth will continue to drive home sales, and growing home sale demand – while its pace may be slowing — will still continue to put pressure on new home prices,” he added. 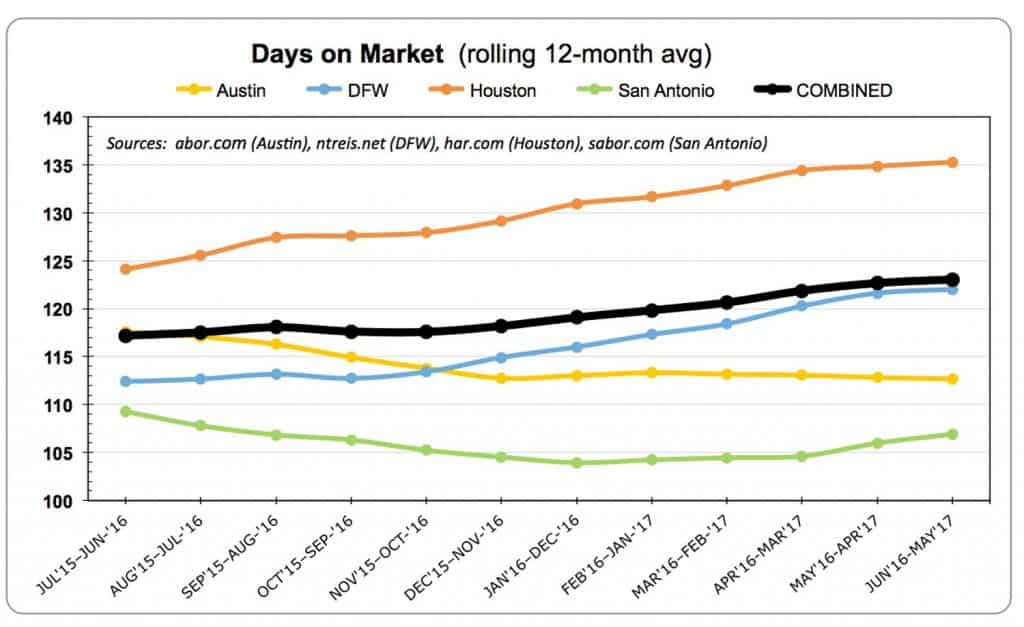 The HomesUSA.com® New Home Sales Index is a first of its kind index to track the sales activity of new home sales. Created by Caballero, who was named “Most Innovative Real Estate Agent” by real estate news firm Inman News, the index is an analysis by HomesUSA.com® of sales of homes listed in the Dallas-Ft. Worth, Houston, Austin and San Antonio local Multiple Listing Services (MLS).

Caballero notes that the average Days on Market for New Homes “is about 65 days higher for new homes than for existing or ‘pre-owned’ homes.” 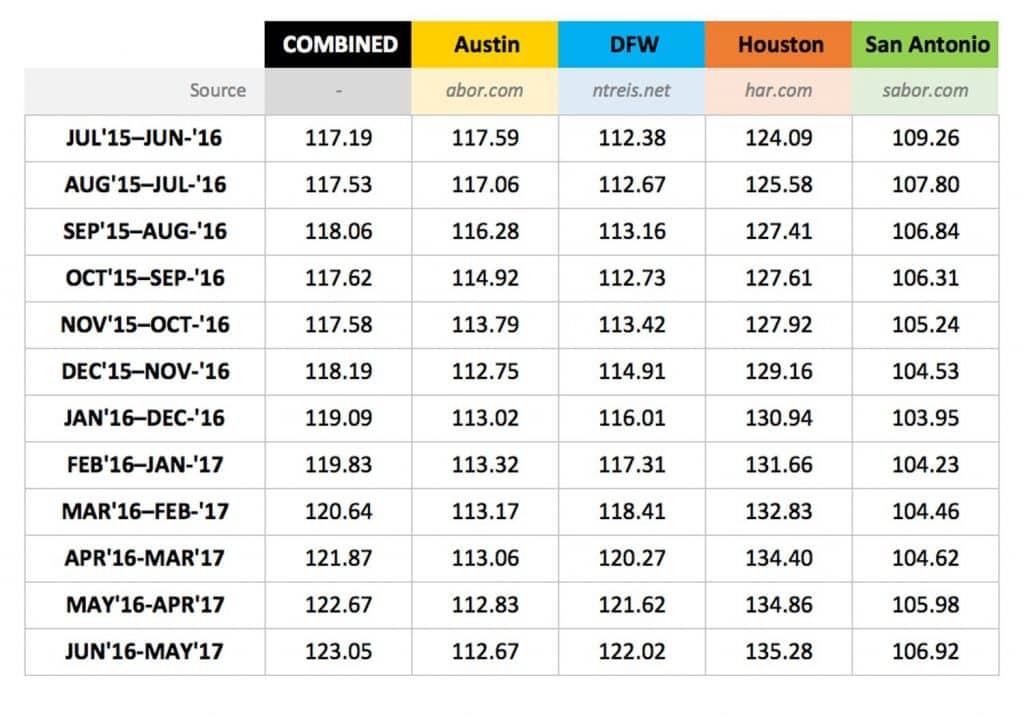 1Prior month DOM numbers are subject to adjustment

Please note that the monthly data is based information reported to the MLS that may be incomplete or subject to further revision by the MLS. While licensed real estate professionals are required to report closed sales to their local MLS in Texas within 72 hours of a closed sale, not all sales, unfortunately, are reported promptly and some are reported more than 30 days later. This late reporting causes the prior month’s reported index number to change to include newly reported sales. Only the prior month index number is impacted and that number, once adjusted, is the final and correct index number. 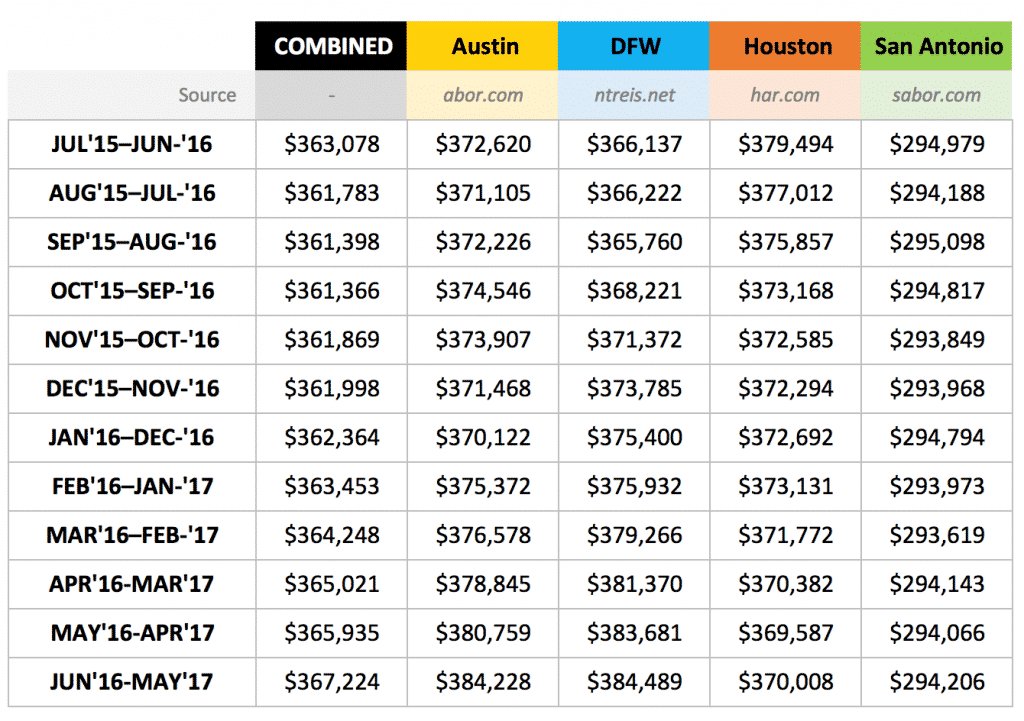 About Ben Caballero and HomesUSA.com

Ben Caballero is the #1 ranked real estate professional in the U.S. in two categories: (1) number of real estate sales transactions and (2) cumulative transaction (dollar) volume. In 2016, he completed 3,565 home sales totaling $1.449 billion in volume. Between 2010 and 2015, he had 16,618 home sales totaling $5.765 billion in volume. Ben has been the #1 agent in the nation in these categories for the last 6 years and is the first and only agent in U.S. history ever to exceed the $1 billion mark for residential sales transaction volume in a single year, accomplished in both 2015 and 2016. Caballero is an acclaimed innovator and technological pioneer within the real estate industry. His drive to leverage technology has allowed him to reach unprecedented, historic levels of sales, as he developed a proprietary SaaS platform, HomesUSA.com®, to aid him in servicing his clients. His individual record-setting production is only possible due to the efficiencies it enables. He was named a 2017 Inman Influencer and a SP2017 Trendsetter by Swanepoel T3 Group. Caballero received the 2014 Pinnacle Award for Real Estate Entrepreneurship, presented by Keller Williams Realty. He was named the Most Innovative Real Estate Agent by Inman News in 2013 and a finalist in 2016. He is CEO and President of HomesUSA.com, Inc., operating in Dallas-Ft. Worth, Austin, San Antonio and Houston. He serves on the Board of Directors of the Greater Metro MLS, MetroTex Association of Realtors. A lifelong Realtor and former homebuilder, Caballero has been a real estate broker since age 21. Follow Ben on Twitter at @bcaballero and learn more about HomesUSA.com® online.