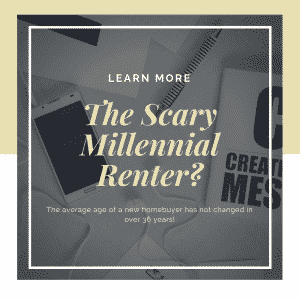 “Millennials are breaking with the habits of their parents and grandparents when it comes to homebuying,” says the media. Millennials, the story goes, are renting longer, living with their parents, and are saddled with student loan debt. In short, it would seem they aren’t interested in home ownership.

Surprisingly study after study has shown that the median age for home buyers has remained relatively consistent for the past 36 years. Research shows most of the classified millennials would prefer owning to renting, but are more vocal about their apprehensions.

The average age of a new homebuyer in Texas is between 29 – 32 years of age and that statistic has been largely unchanged, reports new findings from the Texas Association of Realtors. While other demographics are shifting, it’s encouraging to see that most of the scare around Millennials not wanting to buy a home is just hype.

“I grew up in a small town in Texas, and the goal, everyone’s goal was owning a home. Honestly I am an anomaly because I still rent at 32 years old, almost all of my friends have bought their first homes. I work in multifamily and even there, most people own a home.” Ashlee Wright, 32 year old renter.

As a percentage of all homebuyers, the number of first-time owners has fallen significantly since the Great Recession. Home ownership in general has declined across all age groups, as well. The U.S. home ownership rate has been down from a peak of 69% in 2004 to 63.7% in 2015, the lowest level since 1994. But these declines are not indicative of a shift in desire to purchase, but rather a concern for how to purchase.

Most Millennials consider buying a home more sensible than renting because of lifestyle choices like privacy and security. And while the group may be more pessimistic about their opportunities for buying a home, there is certainly no change in their aspirations to become home owners.