Since 2016, Zillow Group has been tapping into a new revenue stream by charging high-volume builders to post new-home listings on the company’s websites, which include Zillow.com and Trulia, the two most popular home search portals, Inman recently learned.

To the surprise and dismay of some brokers and agents, this includes agent-represented listings that MLSs and brokers feed directly to Zillow that the company has previously posted for free. The change requires homebuilders (or their agents) with 150 closings per year or more to join Zillow’s Promoted Communities advertising program in order for their listings to appear, Zillow told Inman via email. The price for participation is the same for agents representing builders and builders themselves, and the company charges per community, per month. Prices vary based on the location and cost of the community.

“And it’s in a great position to capitalize on those now with its dominant market position. So expect more initiatives like this (and its focus on monetizing rental listings) in the future as it exploits its position in the industry.”

This is not the first time Zillow has charged to publish listings. The company also charges for high-density rentals and other rentals in the Manhattan area. It does not charge for resale properties. Zillow also chooses not to publish certain listings from the MLSs and brokerages it has licensing agreements with, including commercial listings, timeshares, and listings that violate its publishing rules.

Zillow launched Promoted Communities in January 2016 but didn’t announce it publicly until October 2016. The press release referred to it as an “exclusive advertising platform” but did not mention the policy change to start charging builders for listing publication explicitly. Zillow says it reached out to builders, MLSs and brokers — customers and partners who were directly impacted — across the country to let them know individually rather than publicly. Inman was alerted to the change by Ben Caballero, who is known for being the no. 1 top-producing agent in the country and specializes in working with homebuilders.

As part of his services, Caballero puts builders’ listings in the MLS and syndicates them to Zillow, Trulia and other real estate portals. He handles about 600 listings per month from 64 builders. Caballero says it wasn’t until October 2017 that he found out about the change and realized he’d been inadvertently misrepresenting his services to his builder clients (who thought their listings were appearing on Zillow’s sites).

“One of my builder clients, a large national builder, called me and was complaining about it, and then I checked with some of the other builders and they said they’d been contacted by Zillow,” Caballero said in a phone interview. He reached out to the MLSs he belongs to in Houston, Austin, and Dallas and none of their staff knew those builder listings would no longer be published.

“It’s a moneymaking scheme by Zillow to increase their income. There’s nothing wrong with that. If you’re going to do that, say you’re doing that. But they didn’t,” Caballero said.

Zillow did not dispute that Caballero had not been informed of the change, but said it had been and would continue to communicate with prospective customers in the program. According to Zillow spokesperson Kate Downen, Promoted Communities provides a better search experience for consumers and more prominent display of new construction listings on Zillow and Trulia, including allowing consumers to filter by “new construction” and bumping up participating listings in search results.

According to Downen, the program offers “a more accurate set of data for consumers, and we are also able to showcase a comprehensive picture of a large builder’s entire community: what it looks like, how many lots there are, what the neighborhood features will be, etc.” Builders who participate in the program submit plots, timelines, floor plans, sales center hours, and community details to Zillow.

“MLSs often can’t take all of that info, especially when it comes to large new construction communities,” Downen said. “By pulling this data directly from builders, we are able to create a much more rich, full experience for consumers.”

An online brochure for Promoted Communities touts that when builders join, the builder gets a direct link to its website with “No agents listed” so that builders get exclusive leads. However, builders can designate an agent to receive those exclusive leads on their behalf, according to Downen. 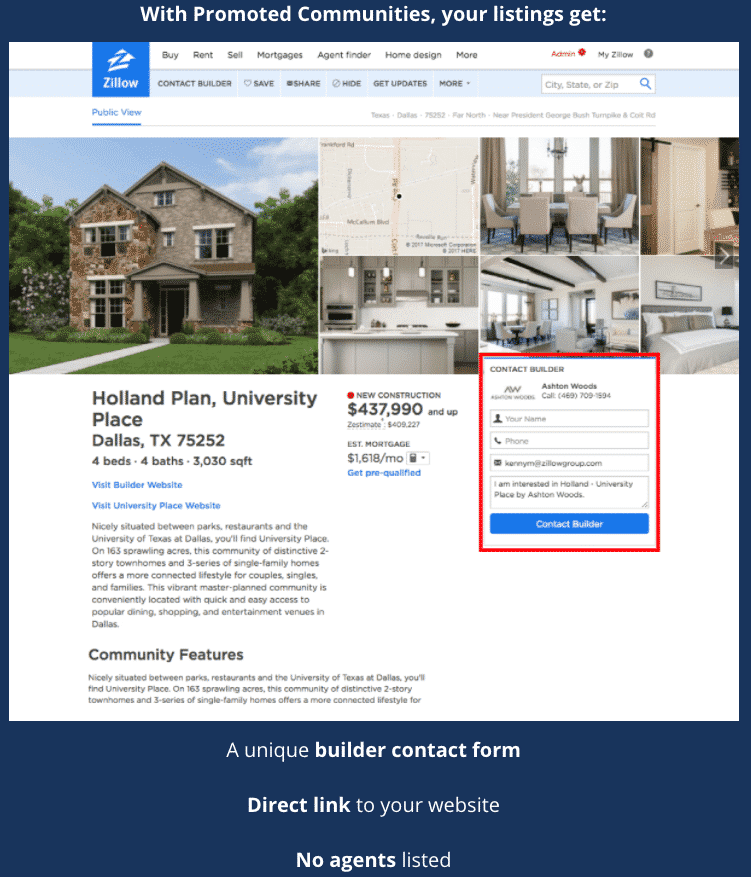 Regardless, Caballero doesn’t see how charging for MLS listing syndication is good for consumers.

“I still don’t understand how it’s in the benefit of a consumer not to publish listings unless the builder is paying for it. They’re not showing all the MLS listings — how is that benefiting consumers?” he said.

Since it’s likely not every builder or their agent will decide to pay, Inman asked: Will this policy result in a hole in Zillow’s coverage, making the data less complete than it would be if the company published builders’ listings from the MLS?

“Before we implemented Promoted Communities, the data we got from builders was often limited and incomplete, which created a sub-optimal consumer experience. Our data shows the full picture this way and the listings that come through are able to provide more comprehensive, distinct features of a community,” Downen said.

She added that, previously, “leads weren’t necessarily directed to the agent or builder who knew these large developments.”

Less than 10 percent of the builders with listings on Zillow have more than 150 closings per year and would therefore be charged for their listings, she said.

Regarding the value of the new initiative to Zillow’s business model, DelPrete told Inman that globally, top portals in the United Kingdom and Australia make more than 10 percent of their revenues from new developments.

“Builders have money to market their properties and property portals like Zillow are great places to advertise, so they’re happy to take their money,” he said.

He declined to comment on whether the move is fair to consumers. “Zillow can really do whatever it wants in this space,” DelPrete said.

The company’s policy change in regards to new-home listings has prompted some concerns about what moves the real estate tech giant could make next.

“If Zillow can monetize its portal in the ways described above, there is little to keep it from monetizing other classes of MLS listings in ways also detrimental to the consumers and brokers who supply it with property listings,” Caballero said.

Carrie Perkins, a Connecticut agent who said Zillow pitched her an $800 a month plan for Promoted Communities in October 2016, wonders if Zillow will charge for listings in golf communities, equestrian farms, and other niche properties next. Sellers expect to see their listings on Zillow and Zillow knows that, she said.

Zillow did not respond to a question asking if there are other categories of listings the company plans to charge agents, brokers or builders to publish.

Perkins decided not join Promoted Communities. “The question always is: ‘What are the other options?’ If you already have an existing website, you’re much better off monetizing what you own than paying for that privilege,” Perkins said.

Referring to Zillow, she said, “They’re crafty though, I’ve gotta hand it to them. They’ve figured out how to make money every way possible.”

She’s already reticent about sending Zillow any more data, given that she already sends Zillow her listings and Zillow posts ads for rival — paying — agents next to them. (According to Zillow, posting buyer’s agent ads next to listings benefits consumers by encouraging buyers to use agents who exclusively represent their interests, rather than working directly with a listing agent. Such buyer’s agent ads will not appear on the listings that builders or their agents pay to include in Promoted Communities.)

Referring to when Zillow pitched her the program, Perkins said, “It’s one of those conversations where I hung up the phone with the sales agent and thought, ‘Oh what have we done?’”