New home prices rose for the first time in the last ten months as total new home sales stabilized and the pace of home sales slowed in three of the top four major Texas markets, according to the HomesUSA.com® New Homes Sales Index and other data released today. The Index is a 12-month rolling average of the Days on Market (DOM) for new homes listed in the local Multiple Listing Services (MLSs) for the four largest Texas markets, including Dallas-Ft. Worth, Houston, Austin, and San Antonio.

The pace of new home sales in December slowed statewide, except in Dallas, the state’s largest new homes market. In Texas, the combined DOM increased from 121.71 days in December to 122.12 days in December. Houston, Austin, and San Antonio also saw their sales pace slow last month, but according to the HomesUSA.com Index for December, the sales pace for new homes picked up in Dallas-Ft. Worth.

Ben Caballero, the owner of HomesUSA.com and the number one real estate agent in the U.S., notes the Texas data echoes some of the findings of today’s announcement by the Commerce Department on New Home Sales for January, which reported total new home sales were 7.8 percent below the December rate, and 1 percent below the January 2017 estimate.

“Though the statewide average shows that new home prices were higher, they appear to be stabilizing,” said Caballero. “And while total new home sales continue to be strong, we also know that last month it took a little longer for homes to sell in all the big markets but Dallas. Dallas continues to be one of America’s strongest housing markets,” he added. 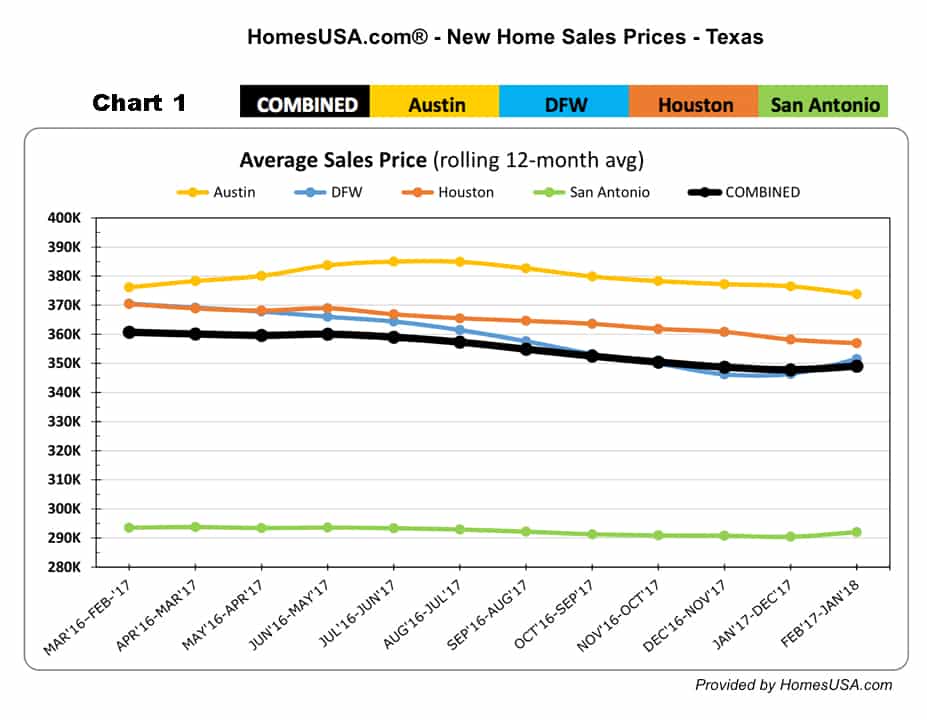 While new home sales were higher in three-of-four of the Texas major housing markets last month, the amount of the increase suggests new home sales are stabilizing. The rolling 12-month average of home sales statewide increased from 3,573 in December to 3,585 in January. That’s according to data compiled by HomesUSA.com® from local MLS and trade associations, including the Houston Association of REALTORS®, North Texas Real Estate Information Systems, San Antonio Board of REALTORS® and the Austin Board of REALTORS®. 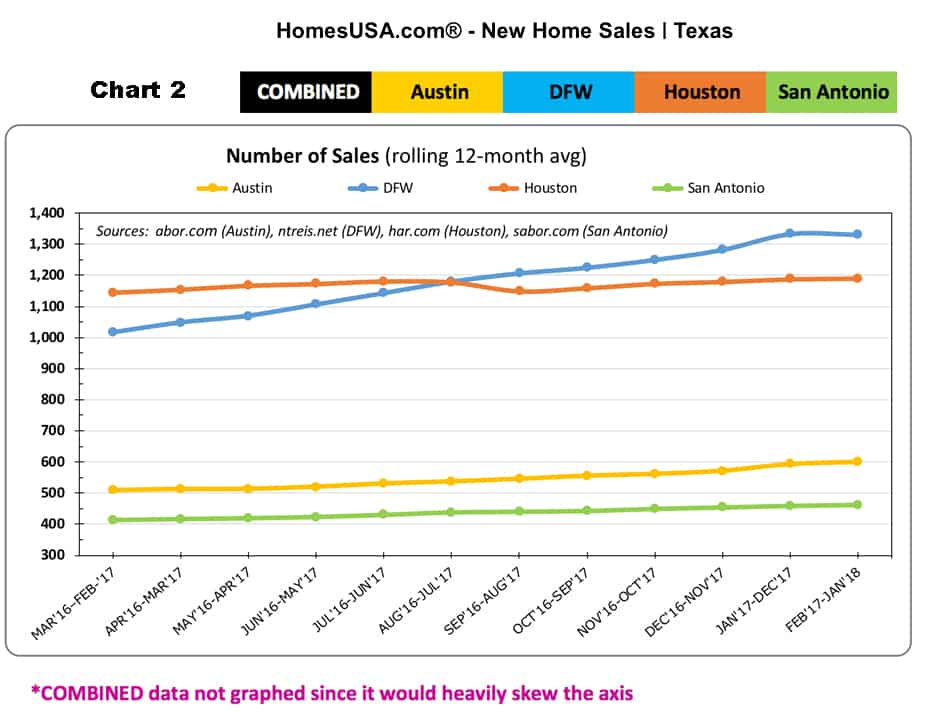 “There’s a huge difference between selling a new home and a pre-owned or existing home,” Caballero explained. “New homes are often listed for sale during the early stages of construction. This early market exposure allows buyers the opportunity to customize the home. Plus, by placing more inventory on the market, as it is being built, expands the inventory of available homes, and that’s especially helpful for buyers and agents in a tight housing market.”

Caballero adds, “When analyzing DOM for new homes under construction, with existing homes, there are no comparable terms.” 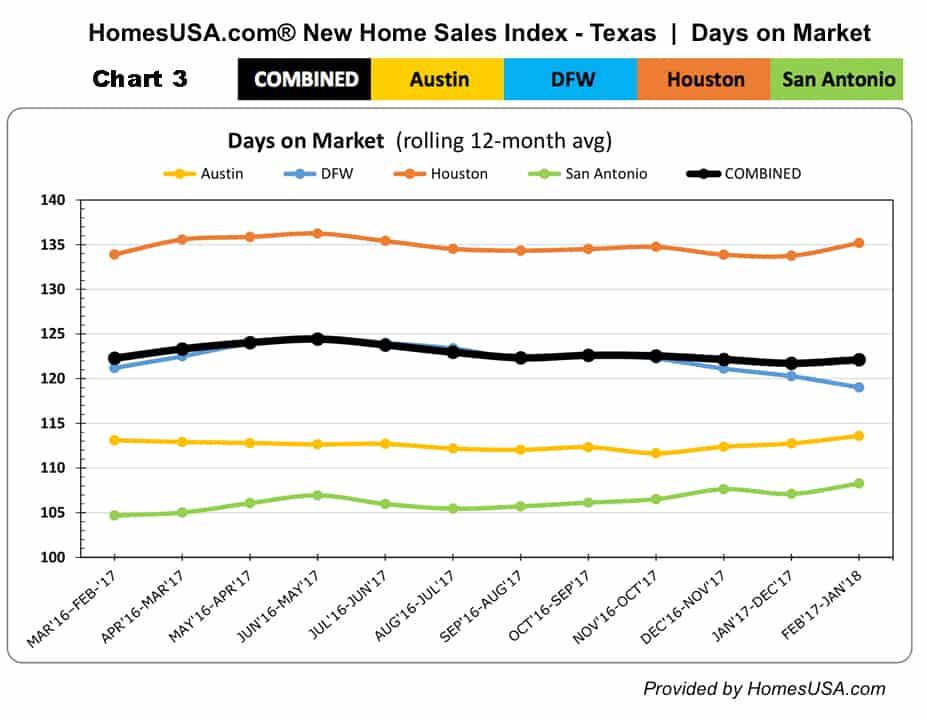 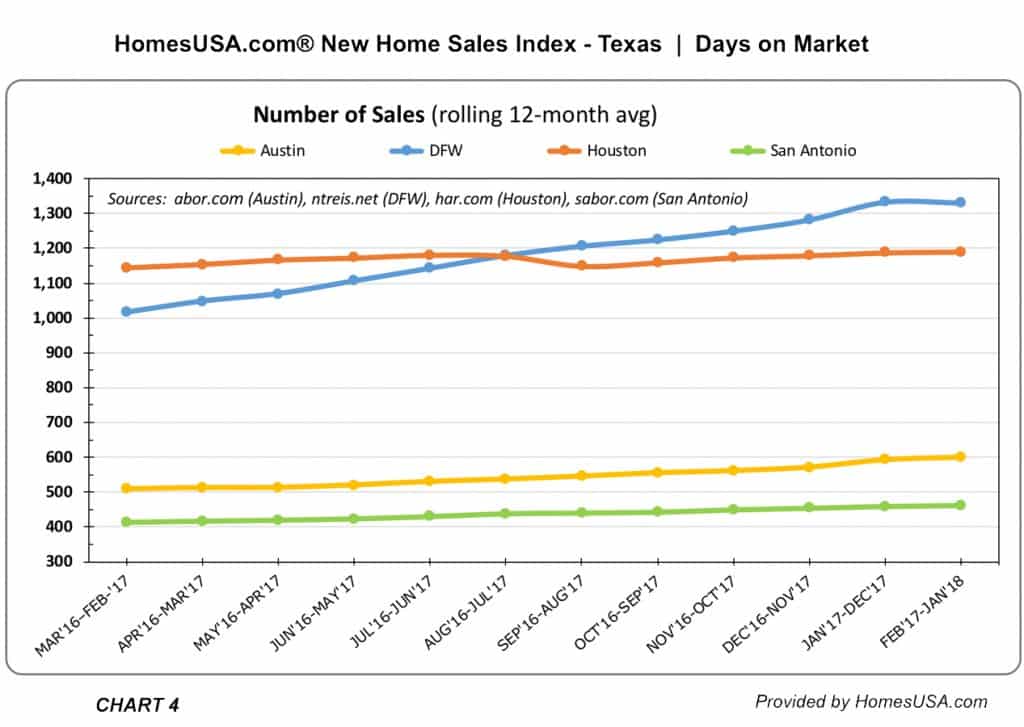