Dallas, Texas – April 23, 2018 – The Texas new home market has been on fire during the last year, as each month’s moving average of home sales has eclipsed the prior month. March was no exception, as evident in the state’s four largest new home markets – Dallas-Ft. Worth, Houston, Austin and San Antonio. New home sales were up, despite the fact that the pace of new home sales pace slowed slightly in March, according to the HomesUSA.com® New Homes Sales Index and other Multiple Listing Service data it released today.

“Texas continues to be perhaps America’s strongest new home market, and our mantra continues to be ‘build, baby, build!’,” said Ben Caballero, owner of HomesUSA.com and the number one ranked real estate agent in America. “At this point, only Houston is showing some signs it may be slightly over built. But demand could also be affected by a Hurricane Harvey hangover that has prompted some families to rent until the Houston drainage infrastructure has been addressed,” he added.

Tomorrow, the Commerce Department will issue its nationwide numbers on New Home Sales for March, at 10:00 am Eastern on Tuesday, April 24.

New home sales in Dallas-Ft. Worth, Houston, Austin and San Antonio totaled 3,631 in March, up from 3,623 in February. This is a 12-month rolling average of sales data, compiled by HomesUSA.com from local MLS and trade associations, including the Houston Association of REALTORS®, North Texas Real Estate Information Systems, San Antonio Board of REALTORS® and the Austin Board of REALTORS®.

The new home sales pace slowed slightly, as the HomesUSA.com New Homes Sales Index increased from 122.03 days in February to 122.63 days in March. The Index is a 12-month rolling average of the Days on Market (DOM) for new homes listed in the local Multiple Listing Services (MLSs) for Dallas-Ft. Worth, Houston, Austin, and San Antonio.

New home prices had been softening recently, but in March, the state index showed an increase in the average new home price. The statewide average was up to $349,757 in March from $349,017 in February.

In the state’s top new home market, Dallas-Ft. Worth, the sales pace of new homes quickened. The HomesUSA.com New Homes Sales Index showed the Days on Market (DOM) decreased in Dallas from 116.74 days in February to 115.66 days March.

In Houston, the opposite happened for the second month in a row. Its new home sales pace continued to slow as its DOM increased from 137.59 days in February to 140.69 days in March. 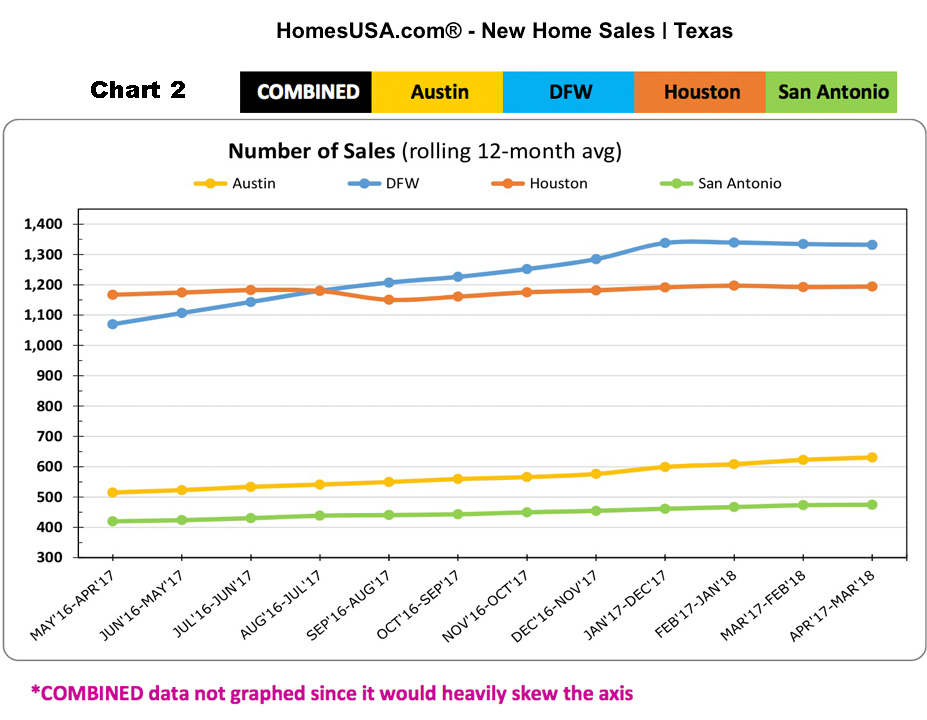 Caballero notes the average Days on Market for new homes “is about 65 days higher for new homes than for existing or ‘pre-owned’ homes.” Why?

“There’s a huge difference between the days on market for new homes and pre-owned or existing homes,” Caballero explained. “New homes are nearly always listed for sale during the early stages of construction. This early market exposure allows buyers the opportunity to customize the home. Plus, by placing more inventory on the market, as it is being built, expands the inventory of available homes, and that’s especially helpful for buyers and agents in a tight housing market.” (See Chart 3 – New Home Sales Index – Days on Market – Monthly numbers 1) 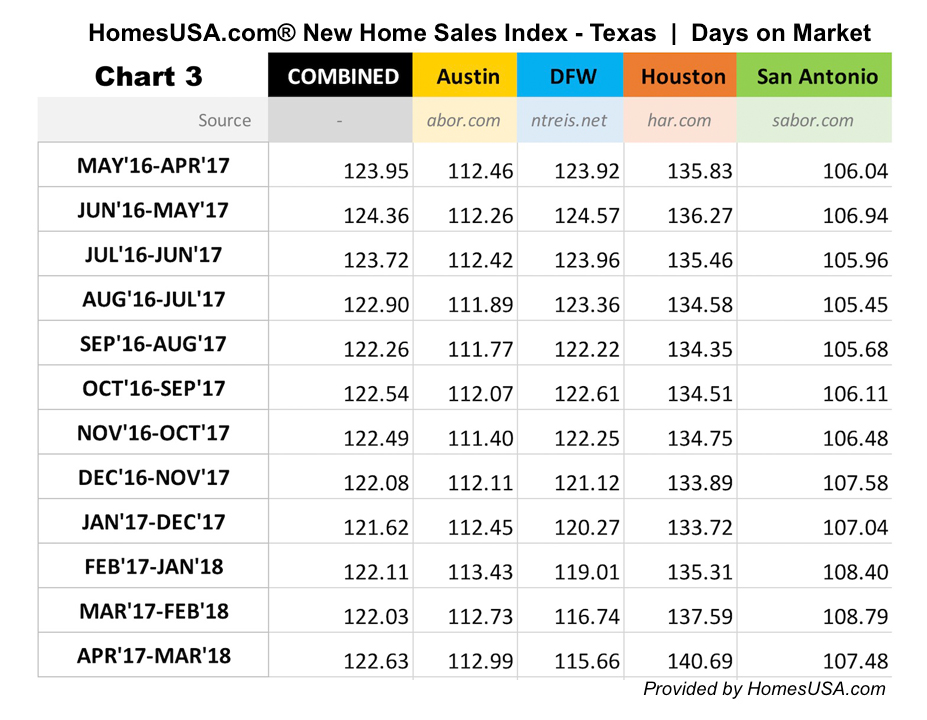 1Prior month DOM numbers are subject to adjustment
Please note that the monthly data is based on information reported to the MLS that may be incomplete or subject to further revision by the MLS. While licensed real estate professionals are required to report closed sales to their local MLS in Texas within 72 hours of a closed sale, not all sales, unfortunately, are reported promptly, and some are published more than 30 days later. This late reporting causes the prior month’s reported index number to change to include newly reported sales. Only the previous month index number is impacted and that number, once adjusted, is the final and correct index number.